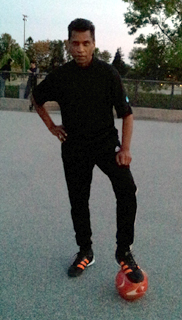 Raj Kumar is a Fijian-Canadian striker with the Angers United of the Marpole Rink Soccer Club (MRSC). He carries on the captain role for his team, often being the strategist. Although his gameplan often clash with his linemate, Sandeep Kumar.

Raj was born in Fiji Islands. He has been playing soccer as long as he can recall. In his early years, he was a member of the Rewa Soccer Association. In 2007, he joined the MRSC and is currently playing for the Angers United.

Raj is known for his remarkable shooting ablities. He moves the ball well with accurate passing, but has the ability from score from long distance, including lobbing the ball past aggressive opponents, into the opponent's empty net. His shots are fearfully powerful, occasionally injuring opponents from shot blocks. Since joining in 2007, he has been a proven top player leading in the goal statistics. He is a smart player that has good field-vision, and positions himself well to cut off oponent passing lanes. Raj also defends the ball well, making it difficult for defenders to steal the ball away. He is also strong on the defensive side, creating difficulty for players to challenge past him. Although Raj is very well rounded and experienced, his age may be a factor in his explosive mobility, and is sometimes caught standing in the offensive zone after the opponent creates a turnover or breakout pass.

Raj Kumar lead all scorers with 2.10 goals per game. He was the heart and soul for team Anger, He was consistent through out the season and at times dominated the game with his shooting skills. He was an offensive threat from anywhere in the field. His great shooting abilties were remarkable.

In 2013 Raj's scoring dipped a lot according to his standards, going from 2.10 to 1.43 goals per game. This perhaps can be attritbued to his teamates not being supportive. His dip in goal was reflective on the team as his team only won 1 of 6 games played this season. Raj hopes that 2014 season resembles 2012 season.

Raj is known for being the most aggressive player at times, commiting more fouls than any other player in MRSC. Raj is quiet in nature, but when things aren't going his way, his composure is questionable. He has gotten into many arguments with opponents, especially with rival league members. Most inter-league friendy matches end up in a verbal fight because of Raj's aggressive play.

"I am scared to dribble pass him because I will get my face planted on the cement."

"Make sure you have your hands protecting your groin when blocking his shots!"

"He's intimidating. I'm worried he's going to yell at me if I don't pass the ball."

Retrieved from "https://mrsc.fandom.com/wiki/Raj_Kumar?oldid=5033"
Community content is available under CC-BY-SA unless otherwise noted.