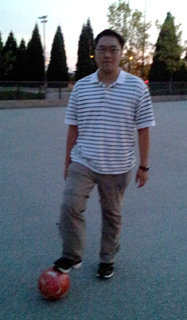 Geoffrey Chan is a Chinese-Canadian midfielder with the Angers United of the Marpole Rink Soccer Club (MRSC). He is occasionally rented out as a contract player for the Rage Alliance.

Geoffrey started his early atheletic career playing basketball, however, during highschool, he converted to soccer and has since then been playing soccer. In 2004, he joined the MRSC, forging him as one of the original members.

Geoffrey has come a long way in terms of improving his game since he joined MRSC. He has made great strides in all of his skillset. He isn't the quickest player, but he hustles for the ball consistently throughout the game. He's most effective on mid range shots, as his shots are powerful, but not very accurate. Geoff struggles under pressure and panics when a defender is near, thus his finish is sometimes questionable after receiving perfect passes from teammates. His defense isn't great, but due to his tendacy to hustle and backcheck, he's a valuable asset to any team. His abilities are quite unpredictable at times, causing confusion and underestimation from his opponents.

"Whoa! Whoa! Whoa!. Where did that move come from?! This guy's unpredictable!"

" Oh he will lose the ball"

Retrieved from "https://mrsc.fandom.com/wiki/Geoffrey_Chan?oldid=5069"
Community content is available under CC-BY-SA unless otherwise noted.